The Citizen character is the default player model provided by Facepunch.

All source files of the Citizen model come with the game. You can find them right in the game folder, under "addons/citizen/models/citizen". These files are effectively always synced straight with the official sources; when new animation files are added on our end, they'll show up in that folder for you too!

If you don't have access to the game yet, here are some source files: citizen.fbx & materials package (Updated 2022-10-31)

These helper bones are set up to be procedural helpers driven entirely by constraints configured in ModelDoc. Feel free to open up citizen.vmdl and look at the AnimConstraintList folder to see what makes them tick!

Because they're procedural, animation data doesn't need to be exported from your 3D program for these; in fact, it's set up to be ignored. Our own animation FBX files usually don't have them exported, which has the added benefit of slightly saving on file size. It's just not needed!

If you're making a model (e.g. clothing) to be bonemerged on top of the citizen, you don't actually need to skin your mesh to these bones... but it's better if you do!

If you're using an animgraph to animate a character, it's best not to touch the helper bones at all, or to reset them to the bindPose state right before the end of the graph. Otherwise, you might see some jitter!

However, if you're using old-school Source1-style direct sequence playback, and if you're doing any compositing (in ModelDoc), your weightlists should include the helpers when relevant.

These bones are used to drive IK constraints in-engine. They need animation data, and the default graph assumes it is present. (todo: explain how to bake that data in the SFM) 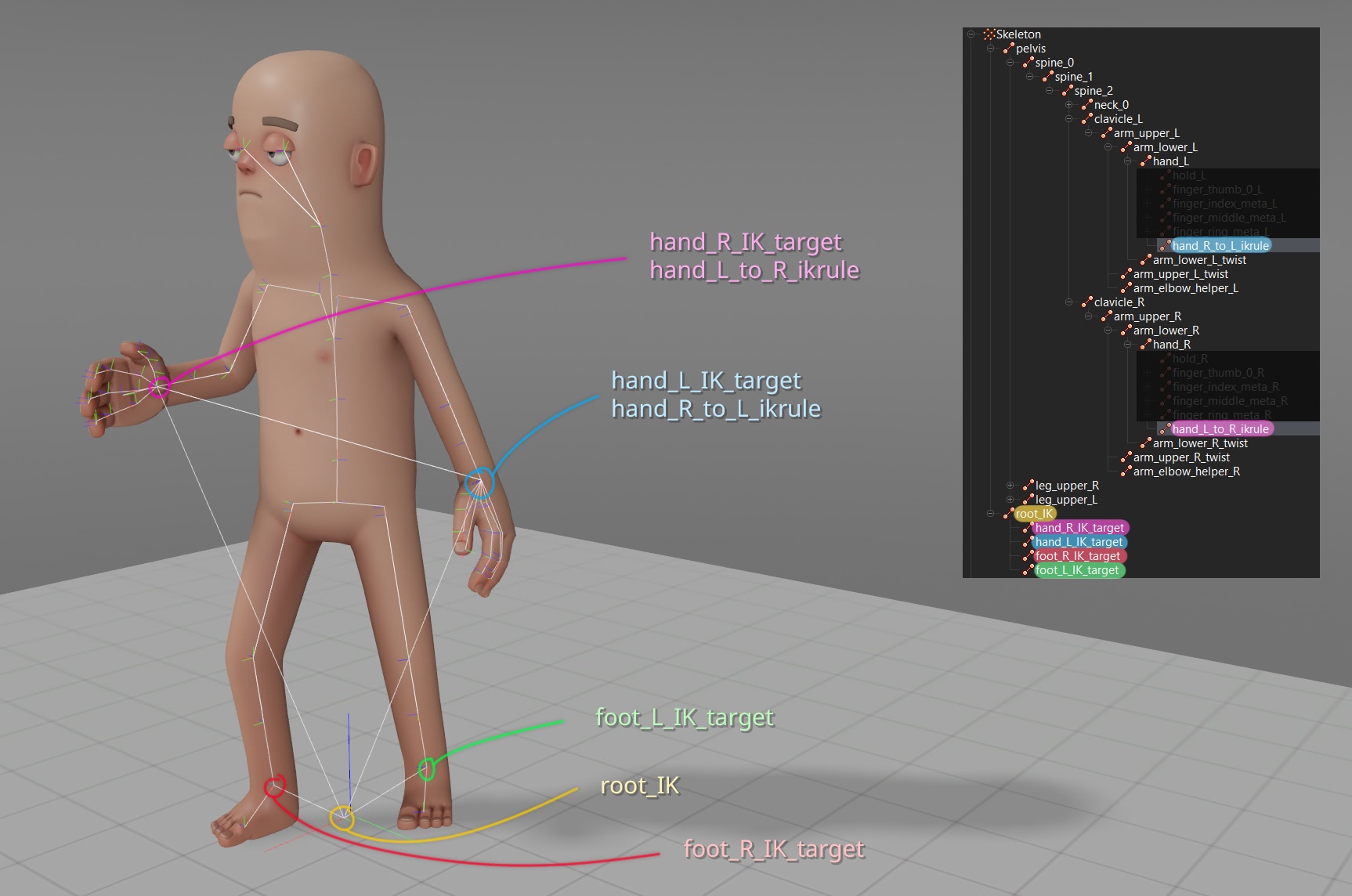 Why are we doing it this way? Because the position of IK targets need to be kept in a different space that won't be affected by any layers, weightlists, etc. that animation compositing is touching, otherwise we can't restore the positions through IK afterwards! Think of them as a way to keep the pos/rot data of hands and feet intact, separately.

Additionally, there are two special IK bones, which are used to reproduce the "ikrule touch" feature from Source 1.

These are used as a way to keep the position and orientation of hands the same relative to each other (in their local space), even after applying layers, weightlists etc. and they are pos/rot constrained in the control rig.

In the animgraph, this is most often how the left hand is made to stick to a two-handed weapon that's driven by the right hand! It's not sticking to the gun itself, it's made to stick back to its original position relative to the right hand, even after all the aim matrices, breathing additive motion, etc. has been applied.

There may be different IK solutions implemented in the future.

To give you an idea of how we use LODs on the Citizen... here are the figures for the base meshes.

(*) For now. Whenever our tech & tools allow us to start maintaining a lower-density head with no headaches with regards to transferring morphs etc., we'll probably try to target a 4-5k tris head for LOD1.

Some clothing items might shift LOD1 back to a distance of 10 instead of 5, but this is only applicable when they are displayed on their own, away from the player; s&box implements a sort of "LOD sync", which makes bonemerged models follow the LOD level of their parent.

Here's a decent rule of thumb for telling at which distances your model needs to switch down a LOD level. Zoom out slowly, and look at when the wireframe starts looking like "solid green". Of course, it doesn't tell the whole story, but it's a good place to start from.

If you are using more than one material, and can cull the number of total materials back to one in your LOD meshes, you should do so!

The Citizen has "support" for stretching and squashing the lengths of arms and legs while still looking reasonably good, thanks to the elbow & kneecap helpers. This is NOT actual "per-bone" scaling; the animations don't store scaling values. However, animations are, in a sense, fundamentally just a collection of lists of position & orientation coordinates for X bones at Y times. For example, the lower arm, being a child of the upper arm, sits in its parent space at a position of X = 10. There's nothing that prevents an animation from saying "in my animation, that X position offset is actually 12", meaning a 20% stretch.

Likewise, there's nothing that prevents any bone from changing its position in their parent's local space. Human anatomy doesn't work that way, of course, but the Citizen is not a photorealistic character, and pushing bones around in various ways allows to get more interesting poses! Almost all of the "long idle" standing poses do this to various extents.

All source files are in centimeters. But because just about everything else is using inches, the model is scaled down using the ScaleAndMirror modifier in ModelDoc. (We're NOT doing it at the import level on each mesh node.)

Therefore, if you want to create something for the character (clothing, etc.), you should also work in centimeters, with the provided sources, and in your VMDL, you'll apply the same ScaleAndMirror modifier with the same value of 0.3937. (4 decimals only is an arbitrary choice on our part.)

This way, no one has to do any scaling using 3D packages, which are notoriously unreliable and inconsistent in how they choose to perform the scaling, especially during export steps. Also, the ability to flawlessly and arbitrarily scale any 3D model, even animated ones, including all their data, is extremely valuable to have, and important enough to be dogfooding.

Animating with the SFM

There is, however, one thing to keep in mind if you want to animate the character using the SFM, with the end goal of exporting that animation back into a compiled version of the model. Here's the thing: you are effectively animating on a skeleton that is already scaled down by a factor of 0.3937. And when you include that animation back into the VMDL, it's going to get scaled down again! It's like you're providing a source file in "inches" when all other source files are in "centimeters". So it will look wrong.

So if you want to animate with the SFM, the solution is to use a copy of citizen.vmdl that doesn't have the scaling already applied. There's already one made for you, and that's citizen_sfm.vmdl!

Before you do anything with the sources, ask yourself: what exactly are you trying to do?

Depending on your needs, there are 3 main solutions you could go for.

Use citizen.vmdl as-is, but hide it, and bonemerge your new player model on top. Think of this as a manually-applied cosmetic item that covers the entire body. Morphs should normally follow and animate identically as long as they're named the exact same as the original model's. (This is a feature we added.)

The middle way ("base model" extension)

If you only need to add a few animations to the VMDL, you can try using the "Base Model" feature. This is somewhat similar to the Source 1 "$includemodel" feature. You can only add animations to an existing model using this feature; you can't do anything else. You only need to reference the official citizen.vmdl file in the "Base Model" field, above the "Add" button in ModelDoc.

Name your new animations something unique (maybe by giving them all a prefix); bad things could happen if animation names collide.

You could combine this technique with the one above; that is to say, hide your new "extended VMDL", then bonemerge your new model on top.

Copy citizen.vmdl in its existing state and work from there. If you create a new "forked" VMDL like this, you may have keep up with any changes and updates that we make to citizen.vmdl yourself. However, this is largely (if not wholly) automated thanks to the *.vmdl_prefab files! You can add your changes right besides them: that is to say, you don't touch the contents of the prefab at all, while your new nodes go under (and outside) the prefab nodes. These prefab files can be thought of as the Source 2 equivalent of .qci (QC includes) files.

If you don't do anything too far off the beaten path, it means you may be prompted to recompile your model every so often when we change anything inside the prefab files, but even then, you may not need to actually do it.

The implementation of an animgraph equivalent for something like this is being worked on.

I want to make something completely unlike the Citizen

If you want to create a model that differs radically from the proportions and look of the Citizen, it'll be up to you to provide your own skeleton, animations, and animgraph... but at this point, you're creating something entirely new, and that's outside the scope of this page.