Is there a release date? What about early access?

No release date has been announced. Access to the dev preview can be obtained on asset.party. It is also possible to get access by posting a portfolio on the forums then being given access manually.

"A product you've received has been revoked from your account by the publisher: S&box for Beta Testing"

If you received this Steam Message, you have not opened S&box for more than 6 months, and your access to the dev preview has been revoked, Garry explained this on the Discord server thusly:

I've removed dev preview access of about 2,500 people [...] The point of giving people early access is so we get constant feedback and suggestions, and that doesn't work unless people are starting the game. [We] will open up access to more people soon, information will be coming down the line in a week or two.

What platforms will be supported?

The game will not be available on Mac at all. Dedicated servers will be able to run on Linux but no official game client will be available for it. Even though Linux isn't officially supported it does run without issues using Proton.

How much will the game cost?

s&box's price has not yet been announced.

What engine does the game use?

s&box uses a version of Source 2 based on the Half-Life: Alyx branch of the engine. Early development was done on Unreal Engine 4, but this has since been discontinued.

How many players can the game handle? What about map sizes?

Map sizes have been lifted and are much larger than they were in Source 1.

The game supports a maximum of 64 players - however, you can write your own networking code in order to go above this through the use of WebSockets.

The world itself isn't as immutable as it was in Source 1. While Half-Life: Alyx did contain an unfinished system for loading/unloading levels at runtime, this isn't included in s&box as of right now.

s&box currently has basic VR support, but it's up to each individual game in terms of the actual implementation for this.

How will the multiplayer work? Can we connect via P2P?

Multiplayer is done through Steam Networking and supports both listen and dedicated servers.

Will we be able to mount games like we can in Garry's Mod?

Mounting other Source-based games is neither possible nor planned.

Will we get dedicated servers?

Don't forget to check out the ModelDoc FAQ.

How do I open the editor?

Launch the game on Steam and you will have the "Launch Game Editor" option. More info on the editor is available here.

What language is being used to make games?

What tools will ship with the game?

A list of tools with explanations is available on the Dev Tools page.

There are third-party tools you can use to port over Source 1 content, but no first-party support is currently available for porting. Remember that you should only port over content that you have permission for.

Can I move over existing Garry's Mod addons to S&Box?

Not directly. Assets may be ported but code will have to be re-written entirely. There is no official GLua support planned and wouldn't be possible anyways because of differences in how almost everything is handled.

Where do I upload my games and maps?

You can upload games and maps in-game using the editor.

Is the game going to ship with some kind of database adapter for MySQL or the like?

You can use WebSockets to interface with whatever server you want - having a WebSocket layer over your SQL server helps for various reasons. There isn't and won't be a direct SQL layer included within the s&box API.

How do I make addons? Is there an addon system?

The following diagrams should help outline the differences between GMod's addon system and s&box's game system. 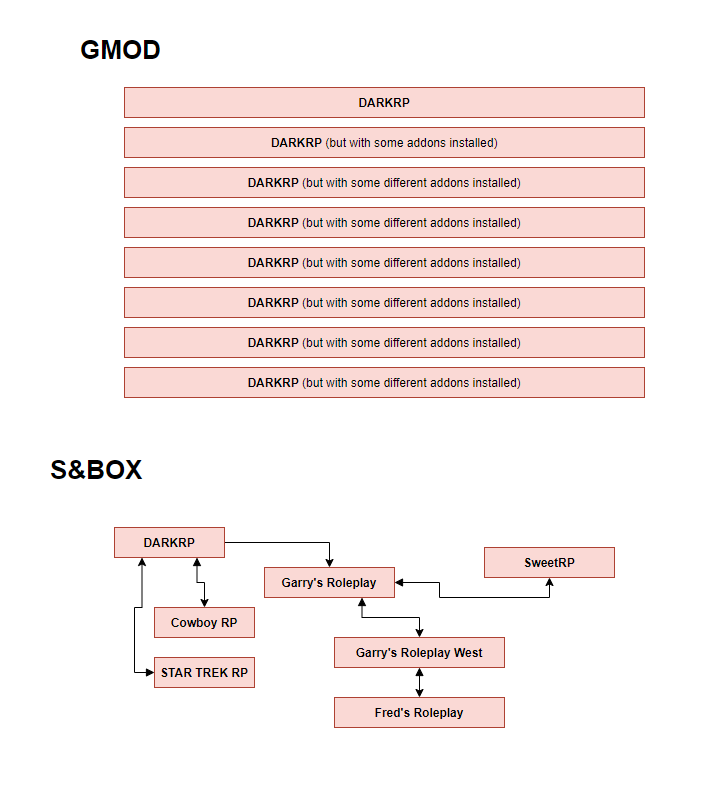