New to C#? No clue what this image means? Lets fix that! 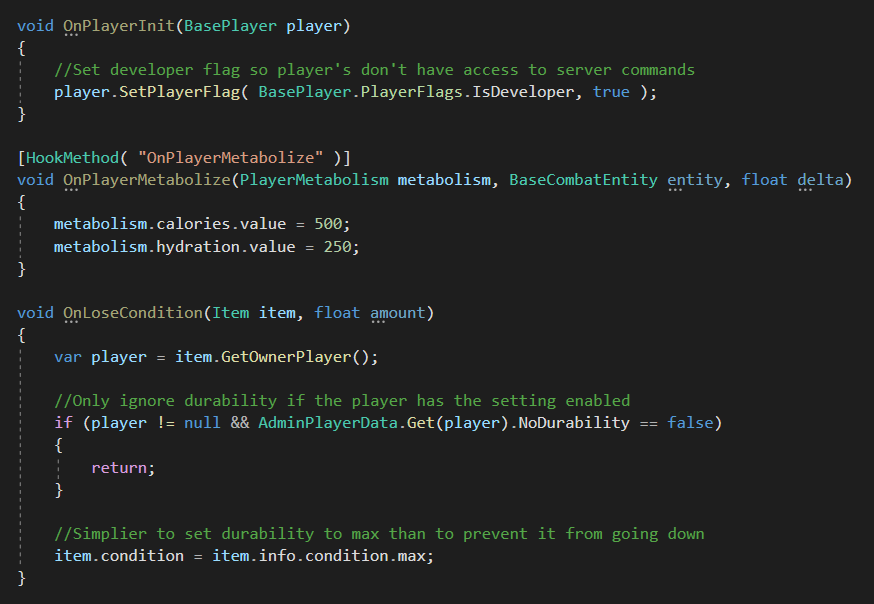 Each section below will explain a part of this image. 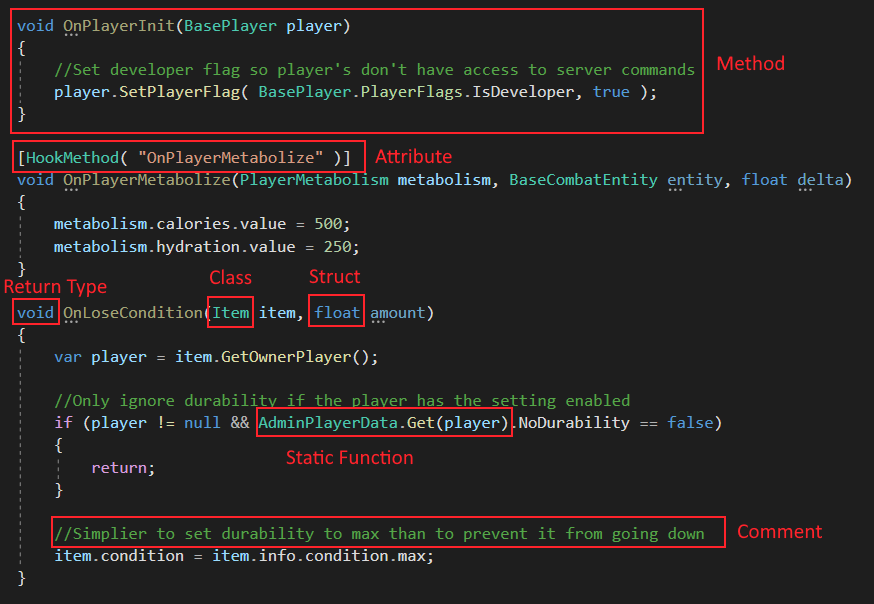 What is all that green text scattered around?

Comments are not counted as code and exist purely to explain the purpose or function of code around it.

Comments are often written directly above the code they explain, so look right below the green text comments to see what they are explaining.

They are written by putting two forward slashes // at the start of a line. Anything after those // will be treated as comments and ignored by the compiler.

Hang on, what the heck is a compiler?

A compiler simply takes your code (a text file) and turns it into an executable program that can run on computers.

For modding Rust there is a special compiler that can take your code, compile it into a program and run it on the fly without needing to restart or pause the server.

Can be referred to by either name.

Functions let us group our code into blocks. This lets use the same code in multiple places and organize by it's purpose.

They can be executed by writing the name of the function with two parenthesis () after it.

void MyFunction() { //Here is a comment! Console.WriteLine( "This will be printed in the server console as text!" ); } //Some hook that will be ran by the modding framework void Hook() { //This will call the function 'MyFunction' above MyFunction(); }

For the examples below, the function Hook() represents a function the modding framework knows about and runs.

Why do you need to put void before every function!

In CSharp we use void to indicate we want the function to return nothing.

It is designed this way to help the compiler find the start of the function.

If we want it to return something else we put the Type in front of the function.

But what is a Type?

One of the major features of CSharp but present in most languages.

A Type is a grouped block of code and variables.

This allows you to re-use code for multiple things and keep it organized by it's purpose.

However, there are two different kinds of types:

The main way you will use types to structure and group your code is with classes.

They can easily be identified by their Cyan color when using Visual Studio.

Classes are never stored directly: the actual data is stored somewhere in RAM and your variable stores the location of the class's data.

When using classes, null represents 'nothing' and is the default value when a class has not been assigned any data.

You will use them a lot, however it is rare you will create your own struct.

A struct will still let you group code and variables together. The main difference is how the data is stored.

As a beginner, you can think of a struct as the same as a class.

Later on read the section on Classes and Structs Explained to gain a better understanding.

Back to functions: let's say we want to add together numbers and return the result as a new number.

In this case, we will put int in front of the function: which represents a whole number.

This will tell the compiler that we want to have a new function and it has to return a number.

int AddTogetherNumbers() { //This will return a 2 return 1 + 1; } void Hook() { int result = AddTogetherNumbers(); //We have ran the above code and stored the number returned inside a variable called 'result' //Now lets print off the result Console.WriteLine( result ); }

Can also be referenced as arguments

Parameters are data or options passed into a function / method.

int CountPlayerName( BasePlayer player ) { //Get's the player's display name and returns the length of the text as an integer number return player.displayName.Length; }