This page is not complete and is still a work-in-progress!
Feel free to contribute but I must ask that you follow the styling format that has already been used :)

What are keybinds all about?

Keybinds allow you to add extra customisability to your controls whilst playing the game and allow you to:

Let's make that more convenient for you!

Now hit F1 whilst in-game (You don't even have to be in a server!) and type out:

Now anytime that you want to find yourself back on the respawn menu you can hit k and your character will drop dead like a minnow out of a survival fishing trap! (Permitted that you haven't been trying to kill yourself too quickly and are on cooldown)

The general formula to create a keybind is as follows:

So you've realised after a while of having your basic "tap k to kill yourself" keybind that you've off'ed yourself a good few times without even meaning to resulting in gamer-rage beyond belief.

Luckily you can set keybinds so multiple keys are required to perform the action, here's how we can improve the previous kill keybind:

It is worth noting that a multi-key bind is not a separate bind from the keys that it uses. You cannot bind one action to k and a completely separate action to leftshift+k. The k action would also still be activated when you press leftshift+k, as well as whatever you have assigned to leftshift+k. Multi-key binds are only useful to protecting against accidentally pressing a particular key, like the 'kill' example, rather than creating new key options for keybinds.

Putting a semicolon between actions in your keybind declarations will allow you to perform multiple actions using 1 keybind setup. For example, you can have it so every time you press x you go forward but also sprint: (auto-run!)

or every time you open the F1 console you also open the combatlog:

or every time you press j you sprint forward and jump:

The plus + (held actions)

When you add a plus symbol preceding the action in your keybind it will mean that the keybind will perform this action only whilst the buttons you've assigned are being pressed. Try the difference yourself with the two auto-run keybinds below:

The tilde ~ (cycling between actions)

When you add a tilde symbol before an action and then include another action afterwards using the previously discussed semicolon the keybind will cycle through the actions given allowing you to have a keybind that can toggle between different actions.
This keybind will flip the view model of the item you're holding in your hand every time you hit it

You could also use this to cycle through different FOVs for example:

Cycling between groups of actions

You can use the meta.exec command before actions in quotation marks to group them together when cycling through actions

An example of this is as follows:

You can reset what state you are on the bind's cycle by binding meta.reset_cycle to another key. This can be done as follows:

If you've made a mistake with a keybind or simply don't want it anymore you can easily get rid of it by typing out the bind once again but instead of including an action do an empty set of quote marks as shown:

or you can use the clear action

You can add the chat.add action in your keybind to get feedback in chat when you use them.

An example of doing this would be:

Making sure your keybinds are saved

After setting up any keybinds in the F1 console that you are wanting to keep you should run the writecfg command to make sure your changes have been written to the config files.

Your keybinds will be saved to the keys.cfg file inside your Rust directory at \Steam\steamapps\common\Rust
If you're still unsure on where this folder is you can go to your Steam library >> Right-click Rust >> Manage >> Browse local files 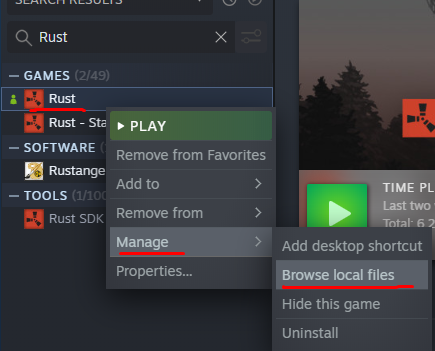 Here are some common useful keybinds alongside a description of what they do; the keys are given as examples, change to your preference.

Here is a list of what each key is called when using Rust keyboard keybinds for a regular UK QWERTY keyboard:

Here is a list of various actions you can assign to a keybind alongside a description: