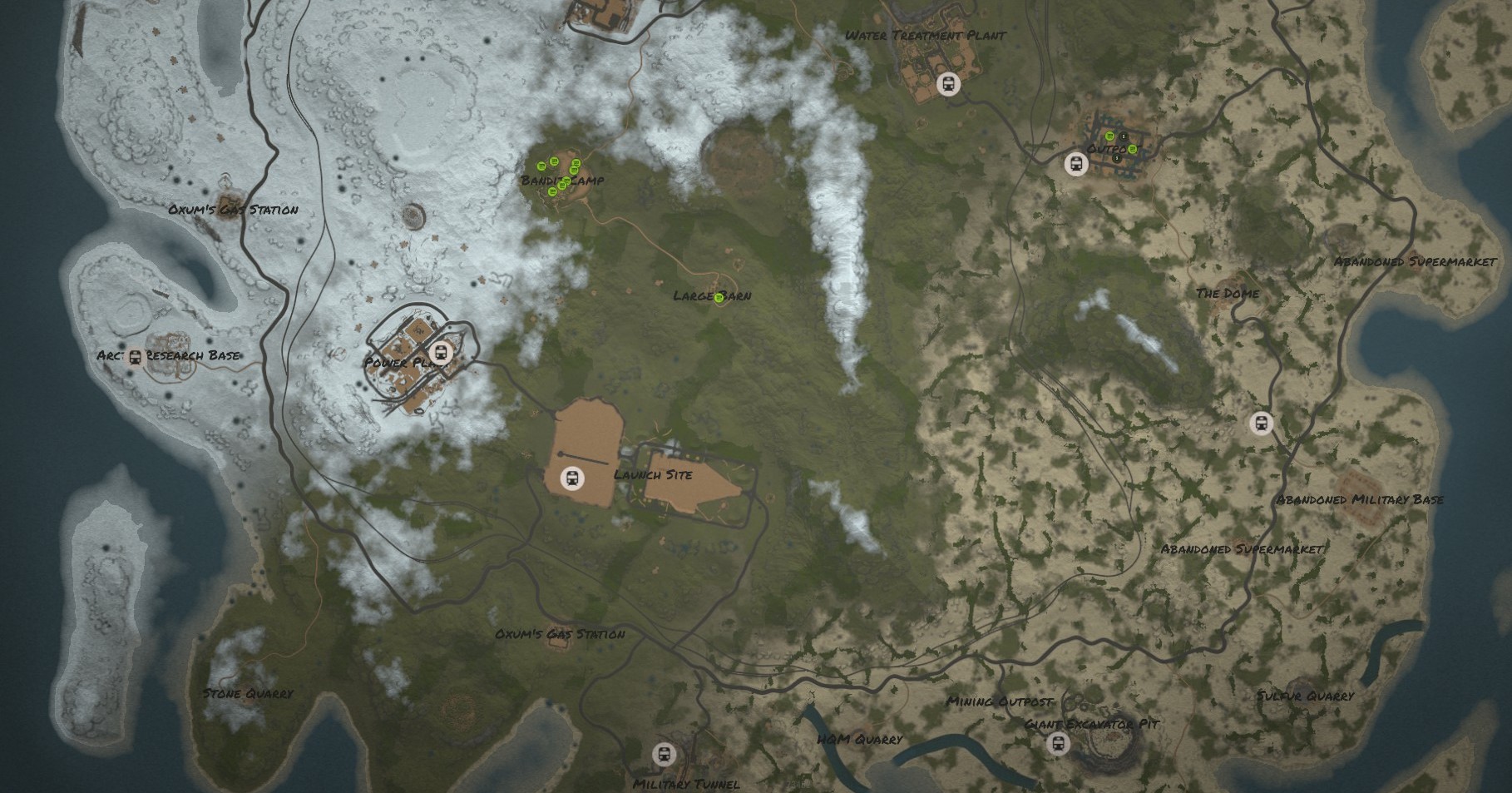 The game world. This is where your Rust experience happens when you're not in the queue. Maps are usually random through procedural generation, but there are also official pre-made maps (Hapis and Savas) and custom community maps through modding. The information on this page is accurate for procedurally generated maps unless stated otherwise.

The World Design section on the wiki offers a lot more details on more specific aspects of what exists within all maps in Rust, both custom and procedural. If you are interested in creating your own custom maps you can head over and read about it. Both Custom and Procedural maps are stored in the same format.

To view the map in-game, you hold g by default.

The Rust map consists of several biomes; grassland, swamp, desert and snow. Each have their own pros and cons.

The largest occurring biome is the grasslands, there is one large desert area and one large snow area, as well as mountains across the map which turn into snow biomes as the altitude rises.

Rivers generate on the edges of the map. They provide an abundance of corn and pumpkins.

Ice lakes generate only in the snow biome. They are flat and spawn in a variety of sizes. They are easy to spot on the map due to there being a smooth land with a ring around it. Barrels spawn around the lake.

The swamp generates only in the forest biome. They are easy to distinguish by their unique mangrove trees. Trash piles and docks spawn inside the swamp. There is a center tree that is indestructible. Sulfur tend to spawn inside at a higher rate.

This cave is distinct by its looks. It has an steel tower protruding out of the ground. There is also a concrete silo with two ventilation shafts dug into the ground. It has one entrance and a bucket elevator exit. There are multiple building locations deep inside.

Transmission Towers spawn in succession to another. Players are able to climb up and mount them to traverse the map with a zip line. There is a small no-build radius around them. However you can build underneath the zip lines.

These electrical stations are generated randomly around monuments and roads and spawn barrels and crates.

Water wells spawn in the forest and provide water to whomever pumps. They are constructed out of sheet metal and have a small no-build radius.

Bus stations spawn to the sides of roads that are directly connecting to a monument.

The train tunnels have entrances from the surface that spawn in monuments or along roads.

Around the map there are railroads and roads they create a ring around the map branching off to connect to monuments. Abandoned vehicles, junk piles, and sign posts spawn randomly along the road.

Roads are a source of Components through barrels and crates. As well as other items you may find in toolboxes

Although there are sharks in the Rust ocean, it is a very good places to get components. With there being 3 large monuments, Oil Rig, Large Oil Rig, and Underwater Lab.

Icebergs are generated only in the snow biome. They are large and tend to have floating ice around them that players can move across. Floating shipwrecks tend to generate on smaller icebergs although they don't spawn any loot.

These rock structures spawn loot around them that need to be untied in order to obtain. They do not despawn so you can constantly farm them.

Shipwrecks will spawn anywhere but the snow biome. You can find them by locating the bottle floating on the surface of the ocean. They will be underwater and sink into the sand after a certain time limit. Only the cargo shipwrecks have sharks guarding the loot so its recommended you bring a weapon if you are looting them.

There are also many floating structures consisting of wood planks and debris, that holds barrels, toolboxes and crates (the same as a road) which can be broken or opened for loot. They do not spawn in the snow biome.

Monuments are larger build-protected areas with buildings and other entities. Depending on the monument players go to these to get loot, to recycle their inventory, to trade or buy items, or to find action in either violent or non-violent manners.

There are larger monuments and safe zone monuments. Safe zones allow players to trade and buy items from NPCs in safety. Committing hostile actions in safe zones will mark you as hostile and you will be shot by the safe zones defenses (NPCs & Turrets). It's worth noting that you are invulnerable from player damage only while in a safe zone.

There are several events around the map revolving around distributing or obtaining loot and changing the danger level of mostly randomized areas by attracting fellow Rust players to these locations. These events have a cooldown and appear from time to time.

The Attack Helicopter flies from monument to monument and attacks anyone wearing more than two pieces of clothing and/or with a ranged weapon in their toolbar other than a bow. Players can shoot the attack helicopter down by hitting either of the rotors enough times, though the attack helicopter will retaliate by shooting rockets that damage your base.

The Chinook flies around the map shooting at anyone behind it, dropping a Locked Crate at one of the monuments.

An Airdrop is dropped by a plane at a random location on the map.

The Cargo Ship navigates around the map and spawns 3 locked crates. over the time it's out it will blare its alarm before despawning.