In s&box, the particle editor is opened from the sbox-dev.exe executable located in your s&box root directory. You can find this directory by opening Steam, Right-Clicking s&box, Manage and pressing Browse local files.

After launching sbox-dev.exe, the Asset Browser should pop up as well as the game itself. From the top toolbar, select the particle editor

In the particle editor, before you can start editing your particles you need to create a new instance. 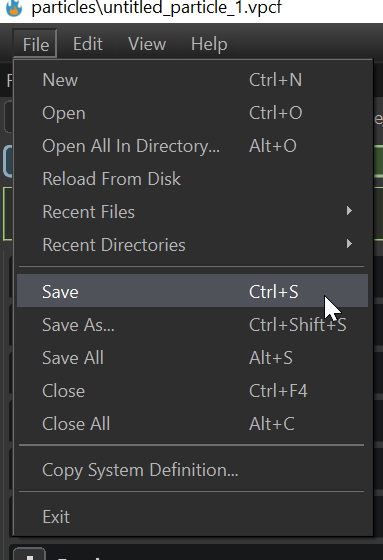 After creating your particle you will need to immediately save it or it will not show up in the viewport!
You need to save your particle to a valid path which the game itself can find. This path is usually "sbox/addons/MyAddonName/particles/my_particle.vpcf"

If you still see this message in your viewport:

You need to save your particle or save it in a proper directory. If you do not do this, the particle will not render or be shown in the viewport!

Now that we have prepared our particle to be shown in the viewport, we can start working on it. The main settings you'll be playing with when creating particles is known as the Functions panel, it's located on the far left side of your application. 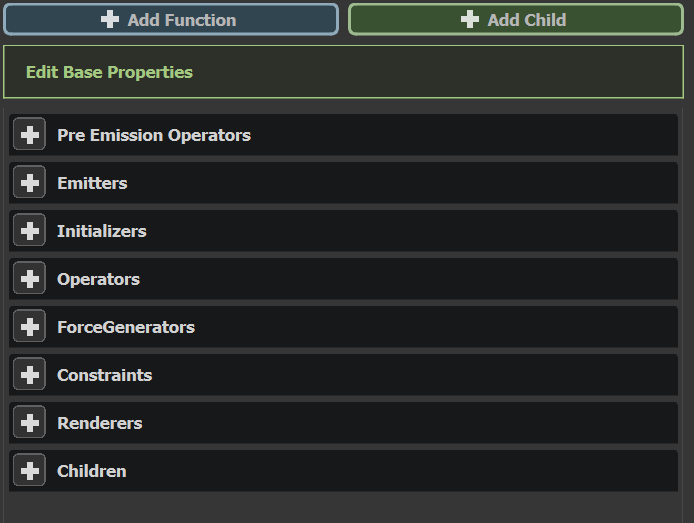 This is how you'll be controlling how your particle works and what it should do. Let's start by creating a basic particle. First press the + button next to Emitters:

A new dialogue will open up, this dialogue is the option you have which you can use for Emitters. 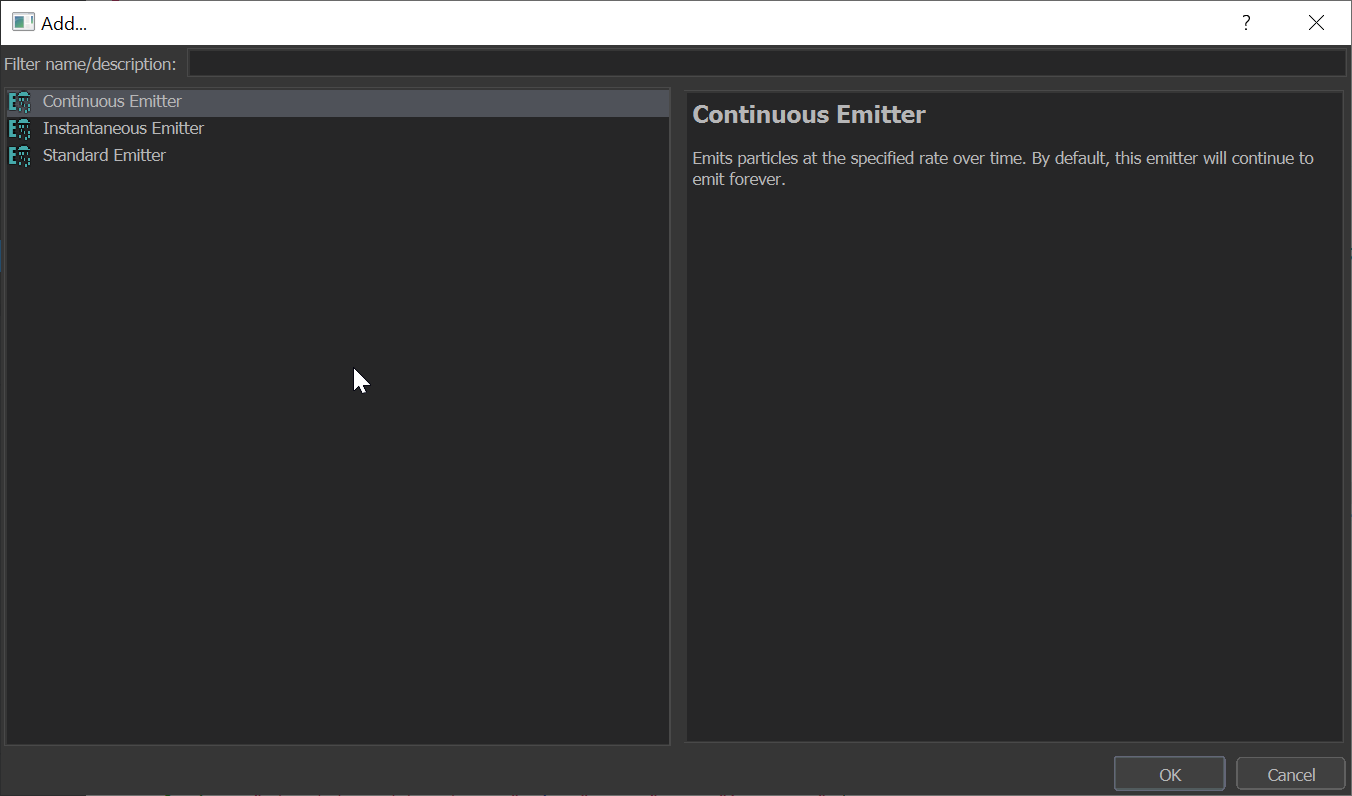 A new panel should now be visible, this is known as the properties panel. It shows all of the fields we can modify for the current function. 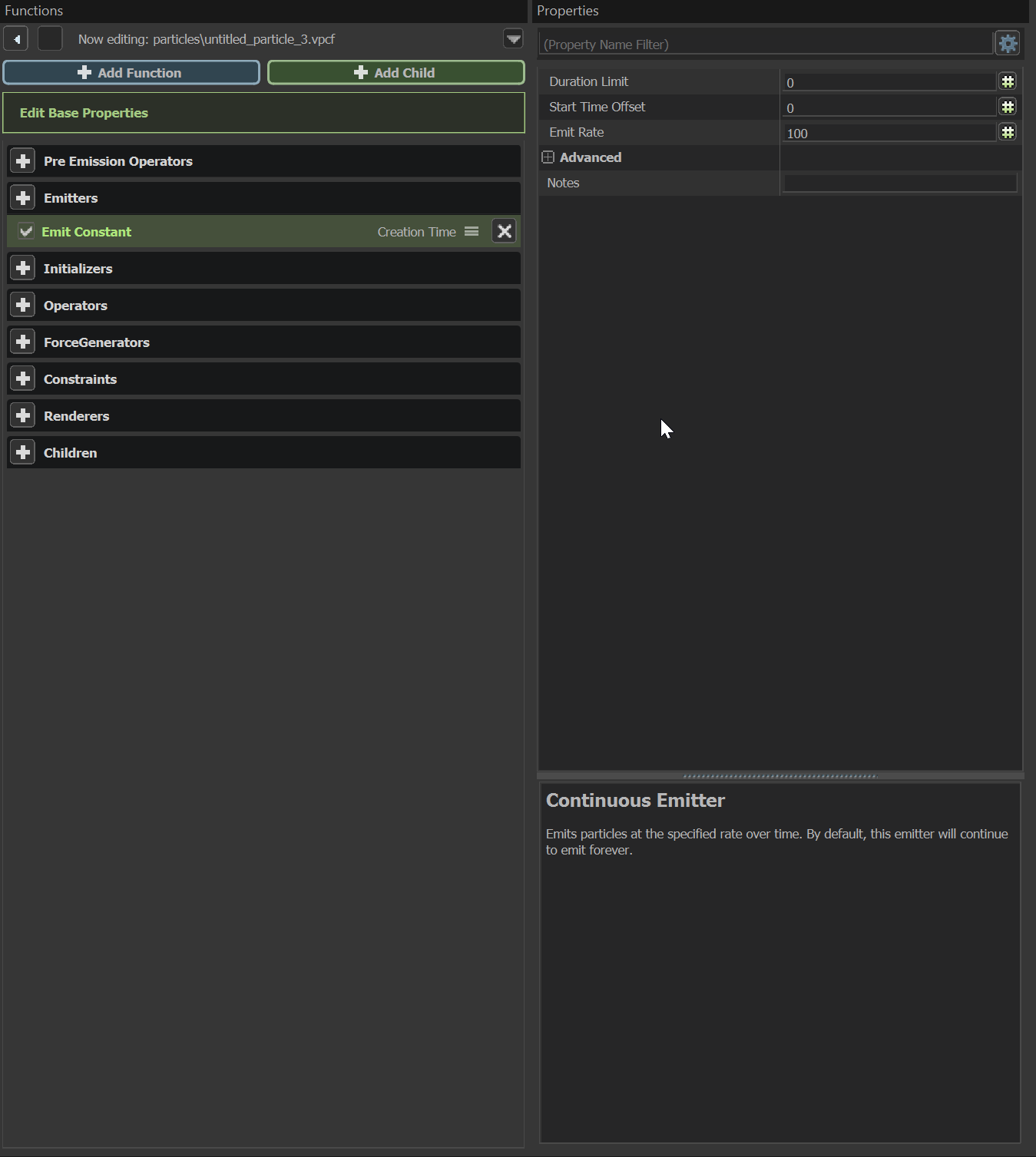 Each property listed here is for our Continuous Emitter which is named Emit continuously in our function panel.

A renderer is how to represent our particles. There are multiple different renderers but we're going to focus on the most basic one, which is the Sprite Renderer. To create a renderer, we click the + button next to Renderers

A new dialogue will open up, this dialogue is to specify which different types of renderers we can use. We're going to pick Sprite Renderer 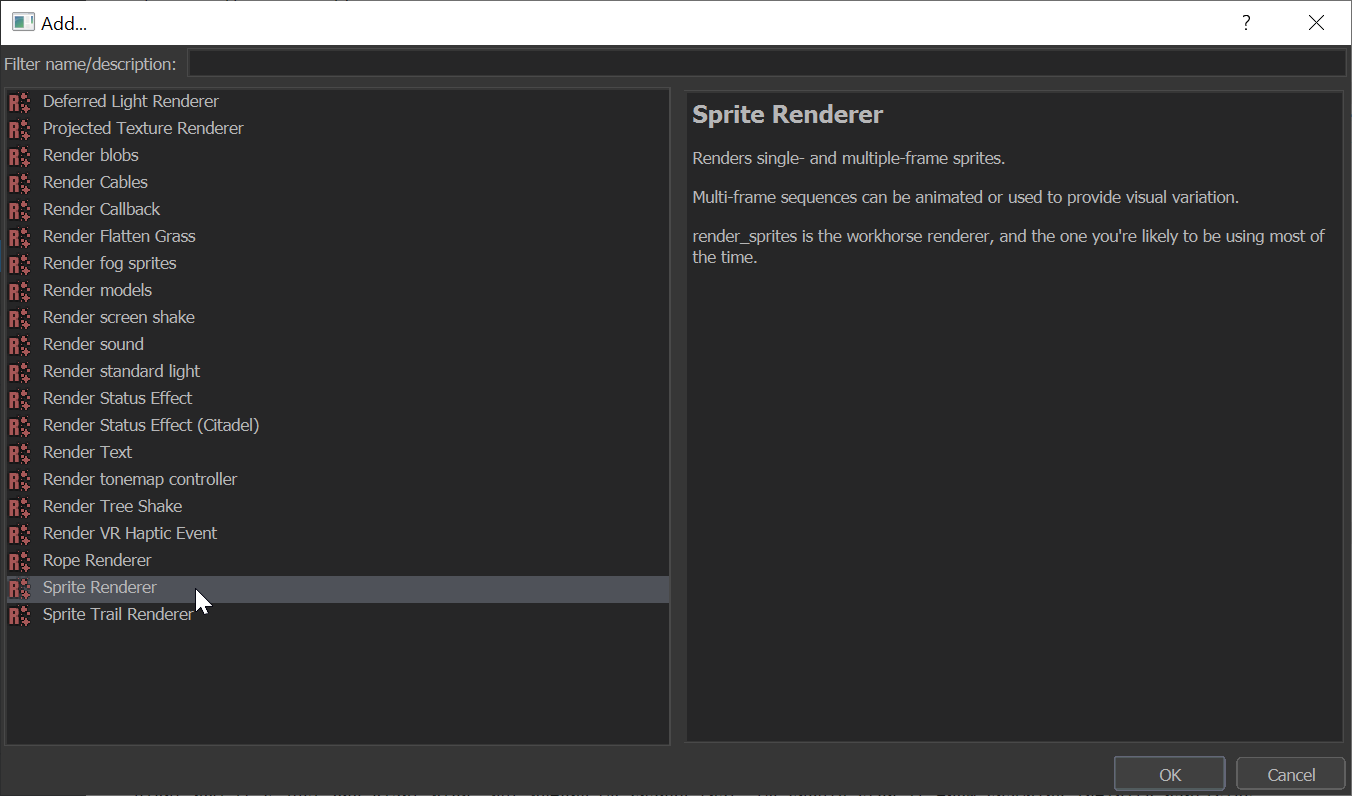 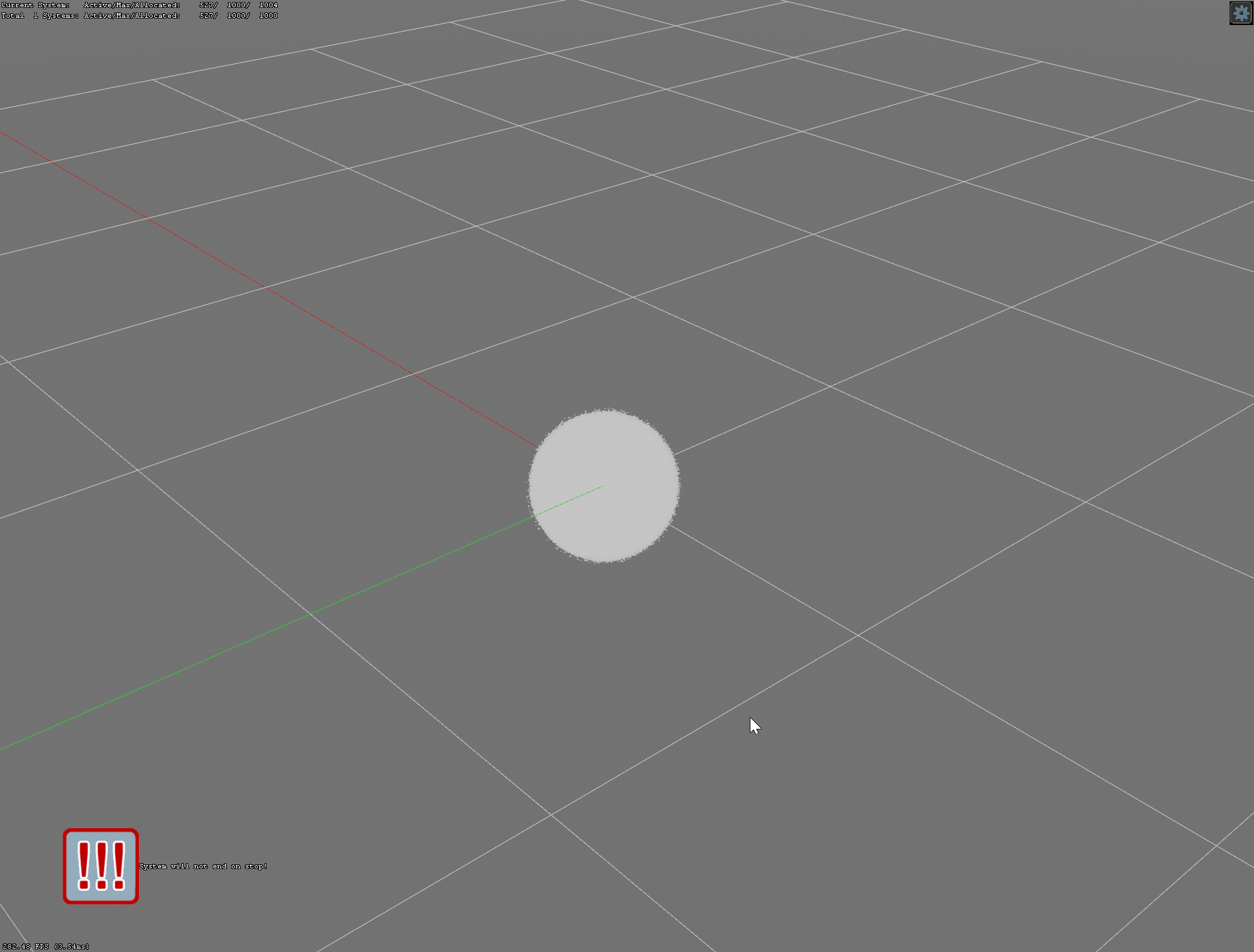 Right now it's just one giant blob, but before we change that, we should stop it from spawning infinite particles.

Particle operators are operations that are applied to your particles. These operations are applied to change specific operators of the particle. The one we're going to focus on is Alpha Fade and Decay. This operator will make our particle fade in, exist for a little bit, fade-out, and become killed. To create a new operator, press the + button next to Operators.

Just like before, we're going to look for Alpha Fade and Decay 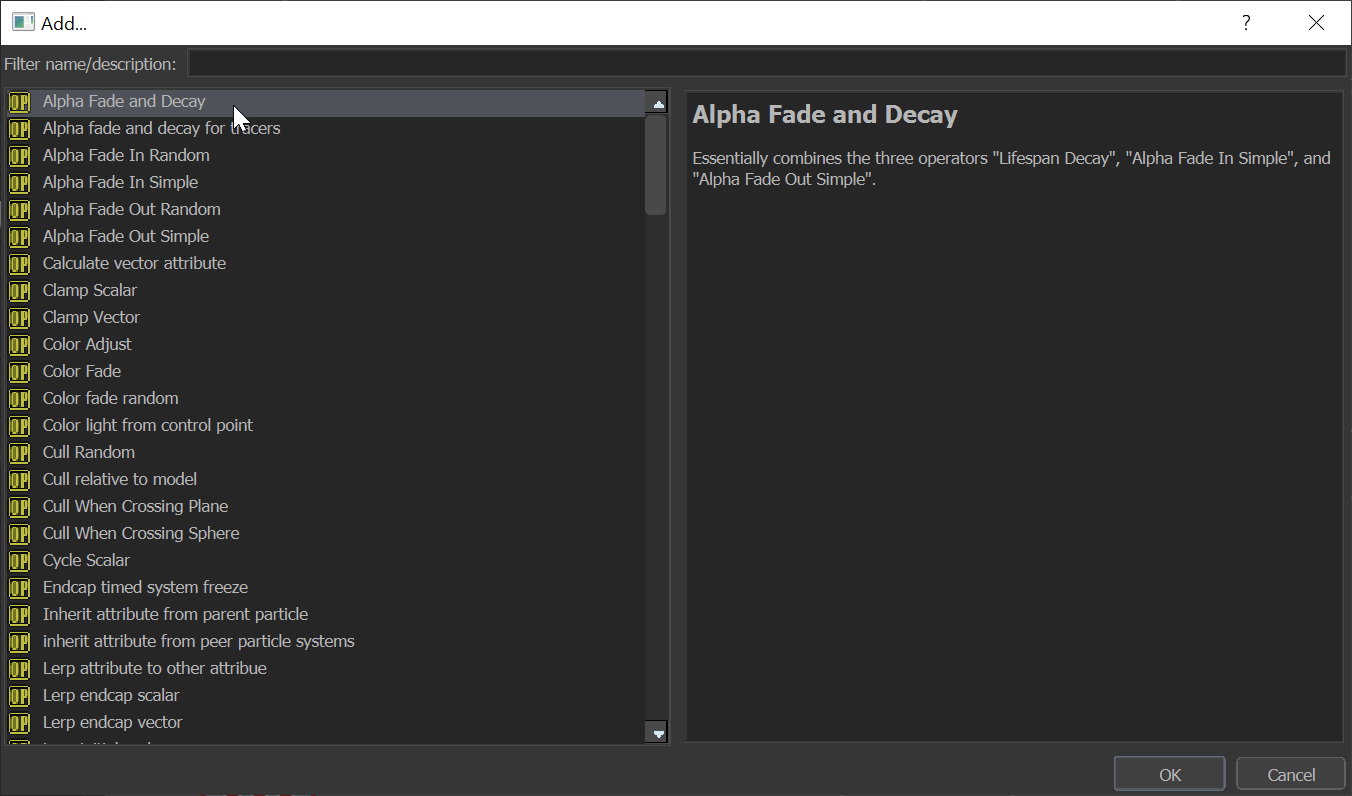 Now we can't really see our particles fading out because of how bunched together they are, however, we can fix this with Initializers!

Particle initializers are properties which are set when a particle is initialized or created. You can set all sorts of properties here, but what we're going to do in our example particle, is to position our particles within a ring. Like before, let's create an initializer by pressing the + button next to Initializers.

We're going to look for Position In Ring. Position in ring does exactly as the name suggests, it places all of our particles within a ring or a doughnut. 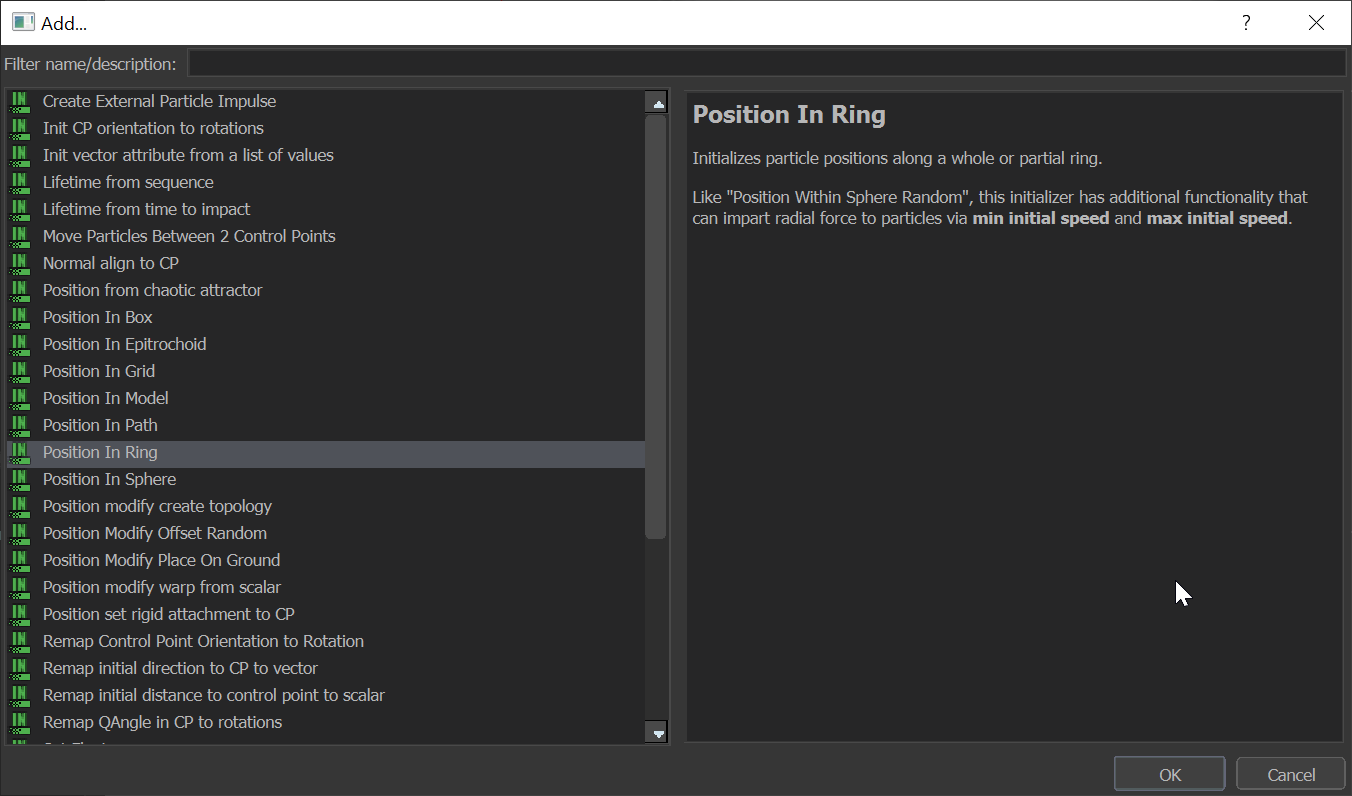 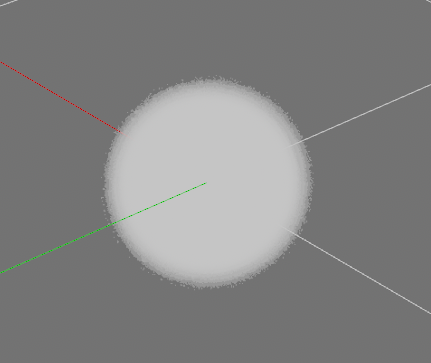 This is where the properties come in which we mentioned before, with Position In Ring selected:

You should now have a working particle!

To initialize your particle in-game, you can use the Particles class.

Spicing up the sprites

You can play with the properties on the functions you've added. Here's a few suggestion for what you can do: